Welcome to the second SwiftWasm update! To make the updates flow steady, we're trying to publish them fortnightly now. Let us know what you think of this new cadence. And here's a gentle reminder that this blog is fully open-source, so if you spot a typo, an error, a broken link, or have any other feedback, please feel free to file it in our blog.swiftwasm.org GitHub repository.

We would like to welcome @yonihemi to the SwiftWasm team who joined us in the beginning of October. After the previous contributions he made to carton it made perfect sense to expand our team. As always, we invite everyone to contribute to any of our repositories, and it doesn't require much prior experience with SwiftWasm if any at all. Bug fixes, feature additions, improved documentation and related changes are very much appreciated and allow our ecosystem to grow even more!

Our documentation was restructured and updated, and is now hosted on the book.swiftwasm.org domain. Please file all feedback in the swiftwasm-book repository on GitHub, which hosts its source code.

JavaScriptKit had a few important updates in October so far. Most importantly, now that PR #91 by @kateinoigakukun was merged, JavaScriptKit no longer uses unsafe flags in its Package.swift. The use of unsafe flags was a big problem for us, as it breaks dependency resolution due to strict checks that SwiftPM applies. If any package in your dependency tree contains unsafe flags, you can no longer depend on its semantic version, or a semantic version of any other package that depends on it.

So far we were able to work around that with a hardcoded check for JavaScriptKit in our fork of SwiftPM. This was obviously a very ugly hack, but the biggest downside of that approach was that you couldn't depend on any package that had a semantic version dependency on JavaScriptKit in upstream Swift toolchains. That meant that libraries like Tokamak could not be built for macOS or Linux. And while the WebAssembly DOM renderer in Tokamak is the most useful module right now, this prevented static HTML rendering from working on macOS and Linux.

Another issue we had with JavaScriptKit is the naming of JSValueConstructible and JSValueConvertible protocols. These protocols are used for conversions between JSValue references and arbitrary Swift values. In practice it wasn't always clear which of these protocols was responsible for a specific conversion. After some deliberation, these were renamed to ConstructibleFromJSValue and ConvertibleToJSValue respectively in #88.

A proposal PR was submitted by @kateinoigakukun to enable unsafe force unwrapping of dynamic member properties in JavaScript by default. That is, it would allow this

in addition to the currently available explicit style with force unwrapping:

The key thing to note is that the first option is still dynamically typed and these options are equivalent in their behavior. If you address a missing property on your JavaScript object with this API, your SwiftWasm app will crash. One possible reasoning for this change is that this would follow the approach of PythonKit and Swift for TensorFlow, and improve readability and ease of use for newcomers. We encourage you to voice your opinion in PR comments to give us more feedback on this proposal.

An issue was raised by @yonihemi this week on our JavaScriptKit repository about i64 Wasm function return type support in Safari. The reason for it is that Safari is the only major browser that doesn't support Wasm i64 to BigInt conversion. Unfortunately, there are many APIs that require this conversion to work, and it's unclear yet if this can be polyfilled on the JavaScript side at all. Currently it looks like we need to apply some transformations to binaries produced by SwiftWasm to resolve this issue, but it remains to be seen how well that would work in practice.

Tokamak didn't see major updates recently, but we've received some important bug reports during the last few weeks. Firstly, there's an edge case with Picker views that use \.self as an identifier keypath. Secondly, Toggle binding is not reset after its value changes outside of the view. Many thanks to @rbartolome for the extensive testing he's given and for reporting these issues!

In the first half of October @yonihemi submitted two important quality-of-life improvements to carton:

There's also an open "Pretty print diagnostics" PR #112 submitted by @carson-katri. It does some magic with diagnostic messages emitted by the Swift compiler, highlights relevant lines of code and formats all of it nicely. You can check out a preview on this screenshot: 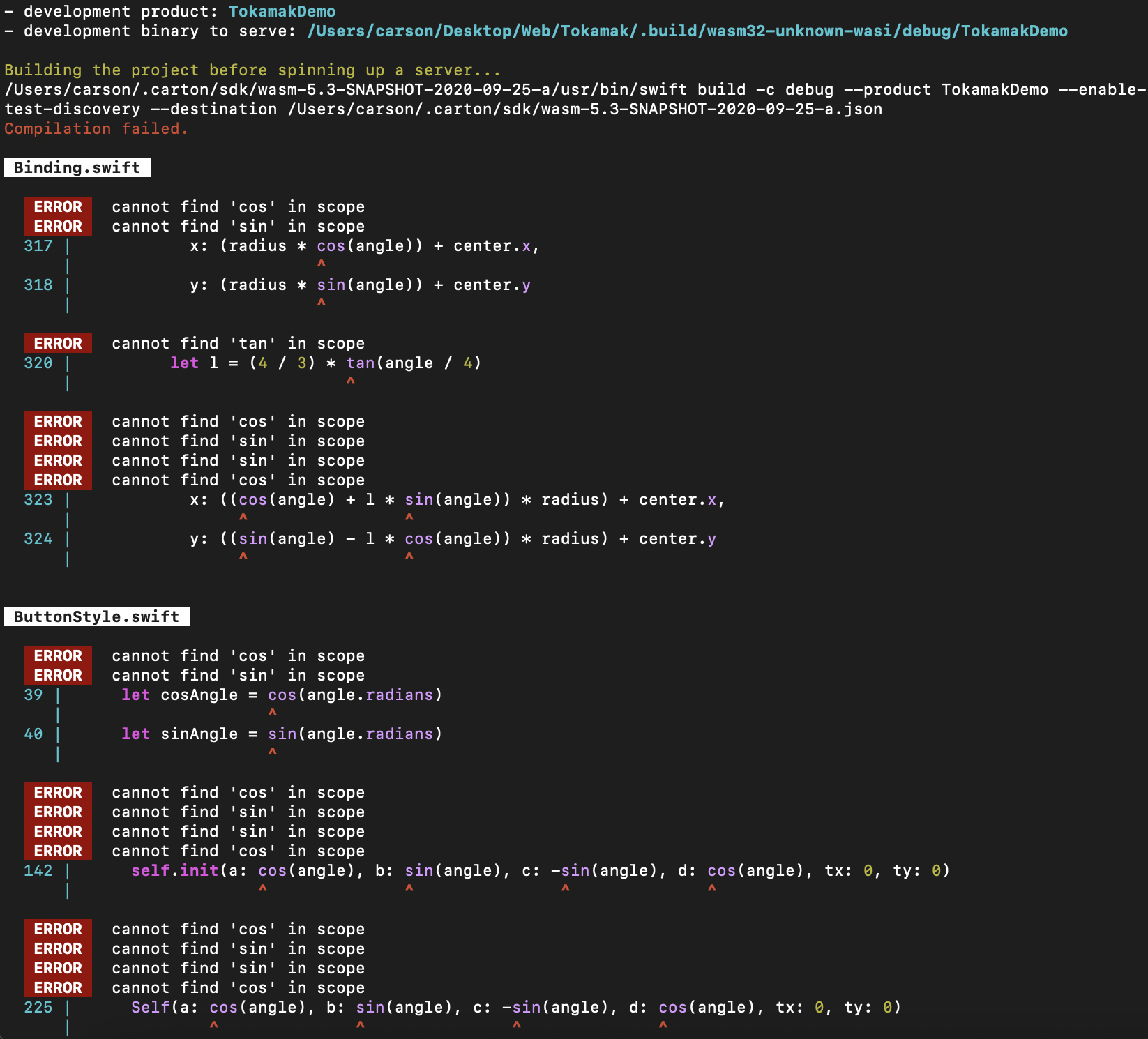 Not much upstreaming work happened in October yet, but there was some progress in adding cross-compilation support to SourceKit-LSP. We are also preparing a 5.3 SwiftWasm snapshot with this patch, which will enable this new --destination option on SourceKit-LSP. When that works, we want carton to infer a value for this option and launch it automatically for you when needed. This is all to make auto-complete work correctly for your SwiftWasm apps and libraries in VSCode or any other LSP-supporting editor or IDE.

Most of the work in preparation for the 5.3.0 release of SwiftWasm has been done. Now that it's possible to build JavaScriptKit without unsafe flags, and with IndexStoreDB and SourceKit-LSP shipping with the latest 5.3.0 snapshots, only the last round of testing is needed before tagging a release candidate. The rest of our work on the SwiftWasm toolchain and SDK was mostly related to fixing a build breakage caused by updates to GitHub Actions runner images and resolving conflicts with upstream code.

A lot of the progress wouldn't be possible without payments from our GitHub Sponsors. Their contribution is deeply appreciated and allows us to spend more time on SwiftWasm projects. You can see the list of sponsors and make your contribution on the sponsorship pages of Carson Katri, Yuta Saito and Max Desiatov.